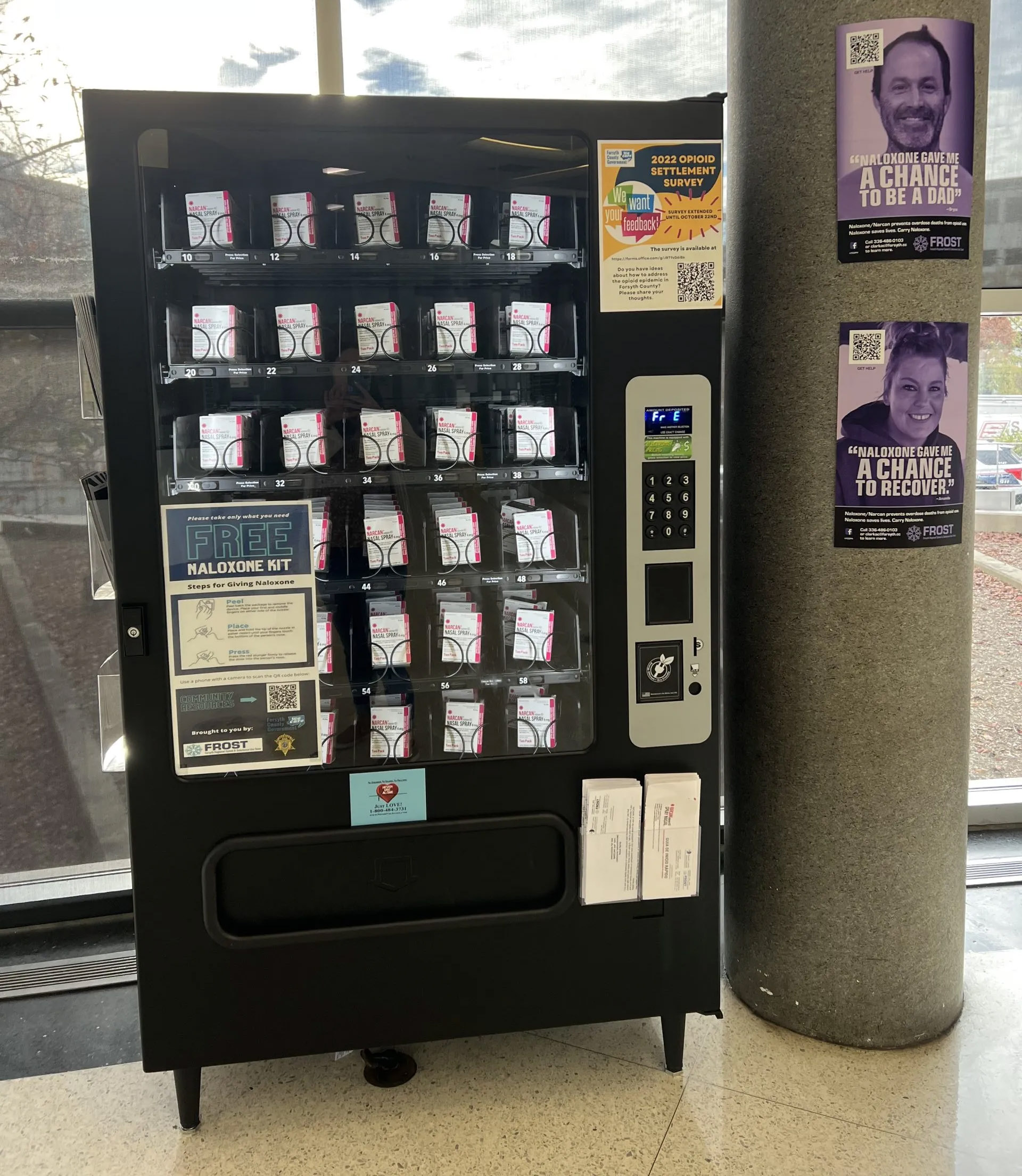 Amanda Clark knows word is spreading that there is a way to stop an overdose using a drug available at Forsyth County Jail.

It’s because of a story told to Clark, who leads the Forsyth Regional Opioid and Substance Abuse Team, by someone from County Emergency Medical Services.

In September, a passerby in downtown Winston-Salem noticed someone unresponsive on the street. This passerby had heard of a new vending machine in the lobby of the county jail that offered free naloxone administration kits available to anyone. The drug is used to reverse an opioid overdose.

They ran inside, retrieved one of the kits, then ran back to the person who had overdosed to give him the naloxone. By the time the EMS workers arrived, the person was awake and talking.

Probably, the acquaintance of this passerby saved a life.

Over the past three months, these new vending machines have been added to the halls of six other North Carolina county jails, as well as the Forsyth site.

Brad Ray, senior justice and behavioral health researcher at RTI International, estimates there are about 80 naloxone vending machines nationwide, and he’s helped facilitate many machines in the Midwest and North Carolina over the past of the last two years.

This is a recent emerging strategy for naloxone distribution at a time when drug overdoses continue to rise nationally and in North Carolina.

Need for naloxone
More than 100,000 people nationwide died from drug overdoses in 2021, according to data from the Centers for Disease Control and Prevention. In North Carolina, 3,759 people died of drug overdoses last year, according to the state’s Opioid and Substance Use Action Plan data dashboard. This equated to an overdose death rate in the state of 35.8 per 100,000 population in 2021, or more than 10 overdoses per day, on average.

It is especially important that naloxone be accessible to justice-involved populations who are at greater risk of overdose. A North Carolina study found that people released from prison are 40 times more likely to die from an opioid overdose in the first two weeks after release, and overdose is the leading cause of death among people returning from incarceration.

In fact, 4,154 overdose reversals using naloxone were reported by community members in 2021, according to the state’s Opioid and Substance Use Action Plan data dashboard. .

Ray wants to see the number of lives saved by naloxone continue to climb and believes vending machines are a new, low-barrier way to get naloxone into better hands.

“It’s just about reducing overdose deaths – that’s it,” Ray said. “It’s through the roof, the number of people dying right now. People don’t know what’s on that reserve. Everyone should have naloxone on hand.

“We knew this was not going to be an easy project because of the stigma, so we really wanted to find prisons that were willing to stand up and say, ‘Yeah, I’m willing to put this naloxone vending machine in my lobby “.” she said.

Larson, now a public safety and harm reduction specialist at RTI International, said the timeline for implementation was quick, so placement boiled down to counties that were showing alacrity about the idea. These sheriffs’ departments also had community partnerships in place to manage the machine long-term, such as who would restock the machine and pay for naloxone kits.

Larson said the vending machines are a convenient, non-judgmental way to dispense naloxone that places no additional burden on prison staff.

“We want to make sure people coming out of prison who are at high risk of overdose have immediate access to naloxone when they get out,” Larson said. “They can walk to the public area of ​​the prison when they get out, and for free they can push the button and get a naloxone kit. In addition, their visitors and relatives who may come to visit can also get a kit. You don’t have to give your name. You don’t have to pay for it. We just want it to be there and easily accessible.

Effective distribution
In his position with the regional opioid and substance use team, Clark jumped at the chance for Forsyth County to get a naloxone vending machine.

“We wanted to make sure we were doing everything we could to prevent overdose deaths in our community,” Clark said. “One of the easiest ways to do this, and one of the most cost-effective ways, is to increase community access to naloxone.”

She was excited about the potential of the vending machine, but as a new distribution strategy, she didn’t know how much it would be used. She thought he might just sit there for months and only have a handful of kits left. But in reality, it resulted in an infusion of naloxone into the community as she hoped.

Since the machine was installed on August 24, Clark said nearly 600 naloxone kits have been dispensed through the machine. Demand was so great that she had to reload the machine for the first time less than a week after it went live.

In less than three months, this machine has already matched the number of kits it has given out throughout the last year at various community events.

The naloxone vending machine in the Cumberland County Detention Center was installed on August 25. Cumberland County Deputy Chief Health Officer Ashley Curtice also saw many people using the machine. She said around 600 kits have been distributed so far.

Due to the prison environment, all vending machines have seven-day-a-week access to life-saving drugs. Educational information is also provided on the vending machine on how to administer the doses.

Although Clark acknowledged that people might have mixed feelings about going to jail for the naloxone, she said it wasn’t as scary as it looks, especially since prison staff support the machine and that no human interaction is required to obtain the drug.

However, Curtice said if the prison environment makes someone uncomfortable, then a person should find another way to get the drug, such as the county public health department or a pharmacy.

Federal government children’s drugs are a ‘drop in the bucket’: pharmacist