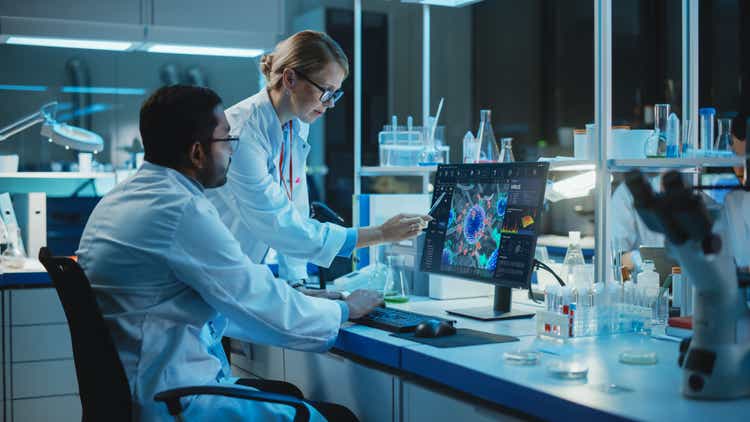 The pharmaceutical giant Pfizer (NYSE: PFE) is one of the largest companies in the world and is mainly known for its great capacity for innovation. Over the years, he has managed to bring dozens of breakthrough drugs to market, such as such as Viagra or Lyrica, while developing Lipitor, a prescription for the treatment of hypercholesterolemia, which has reached $125 billion in sales in 14.5 years. But what are the most promising drugs in Pfizer’s pipeline so far?

Pfizer, according to the latest quarterly report in May, currently has 96 drugs in development, split between phase 1 (30 drugs), phase 2 (31 drugs), phase 3 (29 drugs) and registration (6 drugs) .

Medicines are divided into six main sections, which are:

In phase 3, two of the most exciting drugs from which Pfizer could earn billions of dollars:

Duchenne affects approximately 1 in 3,500 to 5,000 men born worldwide. About 250,000 patients worldwide, about 10,000 to 15,000 in the United States. It mainly affects men, but sometimes, more rarely, it can also affect women. Duchenne causes weakening and damage to the muscles of the body over time, leading to the death of the patient. Muscles begin to weaken between the ages of 3 and 5, and most patients use a wheelchair by age 12. During adolescence, heart and respiratory muscles weaken, leading to life-threatening complications. Genetic testing can confirm the diagnosis and identify the mutation in the dystrophin gene that causes the disease.

Analysts expect the Duchenne syndrome market to be worth approximately $7 billion in 2027. To date, the top drugs approved are Exondys 51, Amondys 45 and Vyondys 53 from Sarepta, and Translarna from PTC Therapeutics (PTCT ) (approved in Europe) and Emflaza (approved in America). PTC Therapeutics earned $423 million (Translarna is worth $236 million and Emflaza $187 million), while Sarepta earned $612 million from its drugs in 2021.

Analysts expect the market to reach a value of around $4 billion in 2023, of which only $1.5 billion will be occupied by the drug so far. So there’s plenty of room for companies that are developing drugs for Duchenne’s treatment to date and are ahead in trials, like Sarepta and Pfizer.

Duchenne syndrome has been treated for several years with drugs that can reduce patient suffering without eliminating it. Pfizer’s main competitors are Sarepta (SRPT) and its SRP-9001 and Solid Biosciences (SLDB) with its SGT-001. Sarepta recently released updated data on SRP-9001 which continues to show great promise.

Pfizer, at the end of April, resumed the trial of (PF-06939926) after the latter was suspended twice: in August 2021 following three serious adverse events of muscle weakness (including two with myocarditis) and in December after the death of a patient.

The other gene therapy candidate, Solid Bio SGT-001, lags behind its two rivals. Solid announced in late April that it has completed enrollment in the Phase I/II IGNITE DMD study (NCT03368742) for SGT-001 and will continue to monitor treated patients for five years after treatment. In March, Solid published favorable two-year safety and efficacy data from the first three high-dose patients, who showed improved motor function two years after treatment.

RSV is a common, highly contagious virus that is spread through contact with a contaminated surface or through sneezing and coughing. According to data from the Centers for Disease Control and Prevention, RSV causes an average of 58,000 hospitalizations per year in the United States, with 100 to 500 deaths in children under five and 177,000 hospitalizations and 14,000 deaths in adults. 65 and over. . The cost of treating adult cases alone is estimated at $3 billion per year.

Analysts expect the VRS market to reach $4 billion by 2027. However, in 2020, the VRS market fell by 48% due to the adoption of protection and prevention tools against COVID-19 which have significantly reduced the transmission of the virus. The RSV market can be divided into a major part related to prophylaxis and a minor part dependent on hospital treatment. The launch by Pfizer and Glaxo of maternal vaccines could stimulate the growth of the sector related to prophylaxis. Pfizer estimates that the entire pipeline of drugs in development acquired from ReViral for the treatment of RSV could generate or exceed $1.5 billion.

Competition with GlaxoSmithKline and other companies

Today, GlaxoSmithKline is the most advanced company in vaccine development. The latest data released by the company shows that the injection is the first to work in the age group vulnerable to primary infectious disease. With this data, Glaxo expects to submit regulatory submissions in the second half of 2022.

Advantages and disadvantages of the two drugs from Pfizer

There are several pros and cons to Pfizer drugs that an investor should consider before putting their money in this stock.

For the treatment of Duchenne and RSV, Pfizer is developing breakthrough drugs that could generate billions in revenue for the company’s coffers. In both cases, however, some companies are slightly more advanced in their development, which could be a significant obstacle. Besides drug efficacy, what will make the difference will be companies’ ability to manage pricing and relationships with healthcare providers.

Pfizer is a dominant company in its industry, and its vast pipeline shows that it is a company that can always innovate and stay on top. Despite fierce competition, Pfizer continues to be among the top biopharmaceutical companies in the world (having developed the most widely used covid vaccine is proof of this). Moreover, it is a company with enormous financial resources (augmented by the resounding success of the coronavirus vaccine), capable of supporting all the trials it pursues.