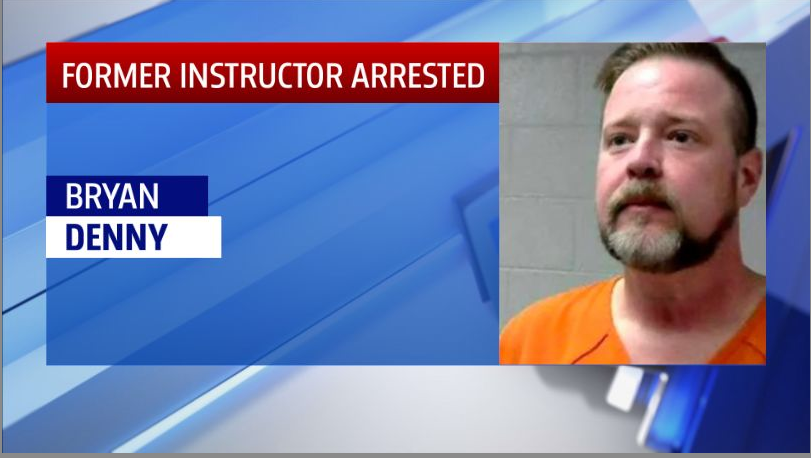 It all started on August 31 when Eastern Oklahoma State College employees conducted security inspections of all EOSC student and resident apartments.

According to the probable cause affidavit, they arrived at the apartment of Bryan Denny, 44, an EOSC Instructor and CLEET Certified Investigator with the EOSC Police Department.

When no one answered the door, employees used a master key to complete the security check.

At that time, they told investigators that Denny came out of the bedroom and met them in the kitchen. Hearing about the inspection, they say Denny’s demeanor changed and he became nervous.

The affidavit states that Denny retrieved a box from the living room and “an item described as a ‘marijuana rolling tray'” and quickly placed them in a cupboard.

Employees say there was a strong smell of marijuana in the apartment, so they called campus police.

At one point, an officer opened a hard plastic carrying case and found a human jawbone with five decayed teeth.

Asked about the remains, Denny declined to speak to investigators.

Denny was charged in the Choctaw Nation of Oklahoma District Court with distribution of a controlled hazardous substance, unlawful removal of a corpse, possession of marijuana and possession of a firearm while he was committing a crime.

“Has he been reimbursed or not?” : Oklahomans follow the money after the return of a rejected Covid drug

A representative for the EOSC told the McAlester News-Capital that Denny was no longer employed as the professor’s criminal justice instructor.

Wagner & Lynch, a law firm representing Denny, says Denny was a tenured professor at Eastern Oklahoma State College, principal of CLEET Academy for 13 years, and a police officer for 17.

“Mr. Denny is the target of a retaliatory campaign by former friends and law enforcement personnel and categorically denies the allegations against him. The Choctaw Nation has decided to join this campaign to destroy the reputation of a good man by making charges she knows are unprovable. This is particularly true of the human remains charge. Mr. Denny received an artifact that lay next to another artifact, an arrowhead, which had been passed to him by a family member.These artifacts were put away and not left on display by Mr. Denny.The charge is only intended to sensationalise Mr. Denny’s arrest, embarrass and shame him to plead a lesser charge or a favored deal when he is guilty of nothing. We look forward to our opportunity in court and hope that the media will report Mr. Denny’s exoneration with the same fervor they report these accusations sensationalist and forged ions from scratch.

The law firm says Denny has pleaded not guilty to each count.