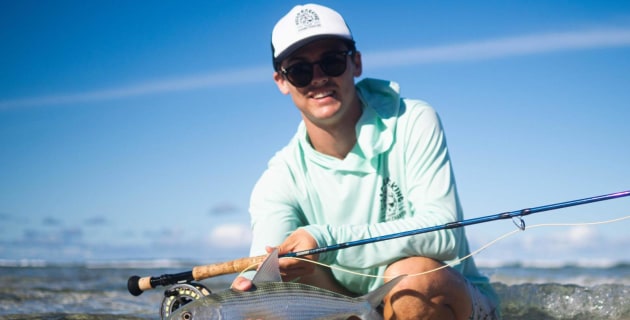 PACKED in a flat environment of pleasant tropical sand, the bonefish’s supreme camouflage, flighty disposition, selective feeding, and blazing speed make them the complete light sport fish. Not good to eat though, so bonefish are a catch-and-release option for anglers, and rarely targeted by commercial interests. That their populations could be threatened seems unthinkable. But a recent study in the Florida Keys found that bonefish there are threatened by pharmaceutical contaminants. As one of my aquatic veterinarian colleagues recently said, “It’s sheer madness to think that we can just dispose of our waste without impact.”

As their name suggests, bonefish are full of bones, which is why they’re not the best to eat. Despite this, economic analysis of sport fishing targeting Atlantic bonefish (Albula vulpes) in the Florida Keys found that this species alone generates more than $1 billion per year for the economy of the Florida, from an estimated fish population of only 300,000 fish! This represents a value of approximately $3,500 per fish per year. But since bonefish live up to 20 years, that means each fish is worth about $70,000 to Florida’s economy over its lifetime. At an average size of 2-3 kg, that means these fish are worth between $25,000 and $35,000 per kg, which at the top of that scale approaches “worth its weight in gold” status. However, despite their high value, strict management, catch and release, and sustained efforts by angler groups to protect and restore bonefish nursery habitats over several decades, Bonefish researchers and Tarpon Trust (BTT) and FIU (Florida International University) have become extremely concerned about the continuing decline of South Florida bonefish populations. This has been particularly the case over the past decade, raising questions that spurred a study from 2018 to examine what other factors are at play, targeting water pollutants.

After 4 years of study, the results recently published by CRF and BTT reveal very worrying information. They found that each of the 93 bonefish examined had pharmaceuticals in their bloodstream. Worse still, almost 60% of the bonefish had pharmaceutical levels that exceeded one-third of the human plasma therapeutic threshold, and were therefore undoubtedly high enough to cause clinical effects in the exposed fish. Additionally, all but one of the fish had cocktails of pharmaceuticals in their bloodstream, which may lead to mixing interactions and poorly understood health effects.

One of the most contaminated fish in the Lakes Passage area near Key West had in its blood:

The origin of pharmaceuticals is undoubtedly from sewage discharged into coastal waterways, but pharmaceuticals have been found to be ubiquitous in bonefish throughout South Florida, both near and far (up to 70 miles / 115 km) from mainland population centers. Each prey item (crabs, shrimp and small fish) examined also harbored a similar pharmaceutical cocktail, indicating that bonefish were exposed not only directly via water, but also via their food chain. Food chain contamination indicates that bonefish is not a special case of high vulnerability to pharmaceutical pollution, but rather involves some exposure of all other fish and invertebrate species that depend on seagrass beds and shoals. sand. Lead researcher, CRF Associate Professor Jennifer Rehage, said: “These results are truly alarming. Pharmaceuticals are an invisible threat, unlike algal blooms or murky waters. Yet these results tell us that they pose a formidable threat to our fisheries and underscore the urgent need to address our long-standing wastewater treatment infrastructure problems.

This study was undertaken because traditional fisheries management and habitat restoration efforts were not arresting the decline of bonefish in the Florida Keys. But unfortunately for those of us who work in the field of aquatic animal health, this news is not new. A landmark study published in 2007 found that exposure of fathead minnows (Pimephales promelas) to environmental concentrations of synthetic estrogens used in birth control pills led to the complete collapse and extinction of the fish population in 3 years in a lake-scale experiment conducted in Canada. “The Pill” had simply feminized most of the male fish, causing recruitment failure. Another study published in 2009 found that household detergents at environmental concentrations affected the moulting, diet, and endocrine system of Maine lobsters on the US East Coast. In 2013, a study of red perch (Perca fluviatilis) exposed to the antidepressant oxazepan (benzodiazepine or “happy pills”) via water showed that the drug increased swimming activity and feeding rates at extremely dilute concentrations commonly measured in the environment in Sweden. Another study published in 2015 on Atlantic croakers (Micropogonias undulatus, a smaller relative of our mulloway) in Texas found that their swimming performance and fin reflexes were significantly impaired after exposure to environmental concentrations of the triclosan antibacterial hand cleaner via food.

The list of similar studies goes on and on, but now the message is clear. Dilution can no longer be considered an acceptable solution to pollution. BTT and FIU researchers tasked with studying and managing fish that are literally worth their weight in gold, were quick to point out “the urgency of upgrading Florida’s sewage infrastructure,” and demanded that “wastewater be purchased first in water”. quality issues. “But these issues are happening everywhere, including Australia. With the noise of animal rights groups growing daily with outlandish demands to ban catch-and-release fishing based on alleged grounds of fish welfare, where are their voices when confronted with the true nature of a real welfare issue for wild aquatic animals?In reality, the equation is simple: Lose habitat or quality of water = losing fish = no fish welfare Of course anyone with basic math skills will also realize that no habitat/water quality = no good to be fish, the equation can also be expressed as follows: Habitat and water quality = fish well-being.

So let’s start by tackling the real fish welfare issues which, not coincidentally, will also lead to more fish. Better habitat = better fishing. Has anyone heard this before?

Safeway pharmacists are now trained to prescribe medications to patients