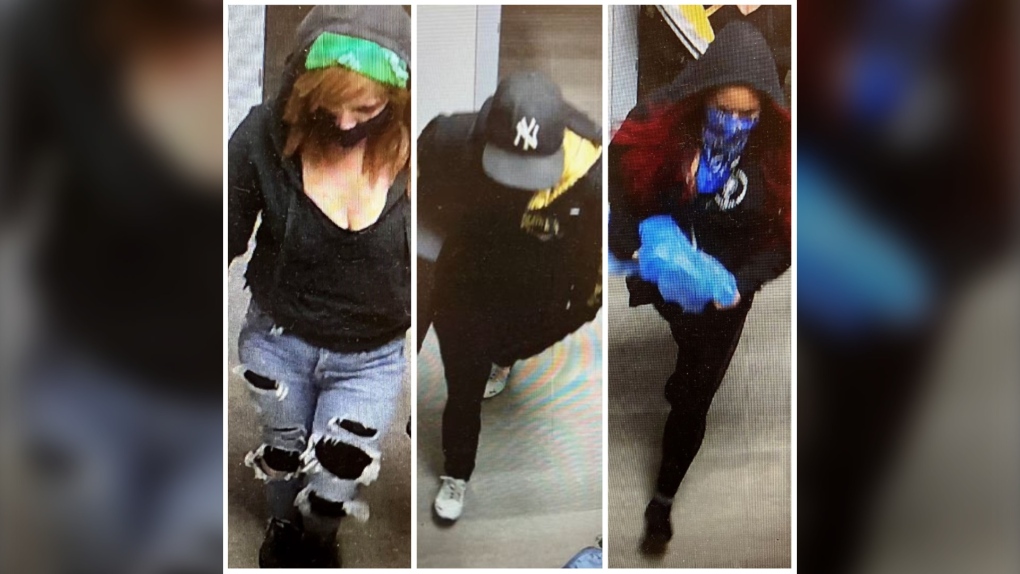 Prescription drugs and cash were stolen from an Airdrie pharmacy earlier this week, and the RCMP are on the trail of a trio of suspects.

Airdrie RCMP say a pharmacy in the Silver Creek shopping complex on Veterans Boulevard was broken into shortly after 2:30 a.m. Tuesday.

Two women and a man grabbed an undisclosed amount of products and cash.

Police released descriptions as well as CCTV footage of the three suspects.

The man is described as wearing a black hoodie with yellow accents, a New York Yankees baseball cap and white runners at the time of the incident.

He was also wearing a face covering and carrying a Thule backpack.

One of the women is described as having red and black hair, wearing a black hoodie with a “Red August Burns” logo and a rose, black pants, black shoes and a blue bandana over her face at the time of the incident.

The second woman is described as wearing a black jacket with a hood, a green bandana, blue jeans and a black face covering at the time of the incident.

Anyone with information regarding the identity or whereabouts of the suspects is asked to call Airdrie RCMP at 403-945-7200 or contact Crime Stoppers anonymously by phone at 1-800- 222-8477, online at P3Tips.com or using the P3 Tips app.